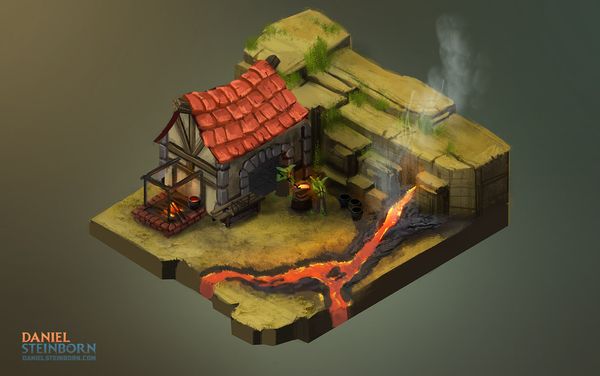 Gavif let the hammer crush onto the red hot piece of metal. Although she and Clobs were taking turns in this task, it was still very exhausting. Add to that the carrying of hot lava buckets to fuel the forge, and the excessive heat in this desert, and you got yourself a job no goblin blacksmith would ever take on by choice. But someone had to, and this moon it was Gavifs turn.

“Do you think they are coming for the device today? I don’t think we will have it done by tonight”. Gavif wiped sweat from her forehead, taking a short break to catch her breath. “I know we need it desperately, it’s our only way of winning this war. Should’ve gotten us more hands though to finish the bloody thing in time”.

“They need everyone they can get to hold the front lines, Gav. We didn’t even get some guards!”.

“Who needs guards around here? We’re in the middle of the damned desert, Clobs! Nobody in their right mind will send a raiding party out here”.

“Don’t forget what we are crafting, Gavif. If they get wind of it, their whole army will be here to stop us in no time”. Clobs reseated the already cooling piece of metal on the anvil and prepared for another series of blows with the hammer.

“I’m not even sure the damn thing can hold that much magic. Might as well explode in their faces.”

“I’m sure the plans are accurate, Gav. They got it from the dwarfs, and everyone knows how finicking they are with the safety of their devices.”

“Yeah you’re right, Clobs. I just hope they don’t come to frame us if it fails. All those tiny parts. How do dwarfs build such things with their stubby fingers?”

“They have a lifetime to master their skill. And they get really old, Gav”. As the piece of metal had cooled down by now, Clobs put it back on the forge.

“Time to get another load of lava”, Gavif said. “This bucket here is almost empty. Don’t wanna risk letting the metal run too cool or it will crack”.

“Stupid plans, asking for such hot temperatures. I wonder how the dwarfs get their forges that hot, there must be another way than pouring bloody lava into it”.